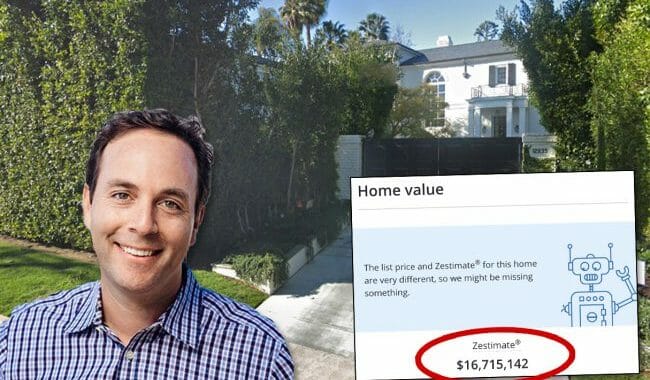 Spencer Rascoff, the co-founder and former CEO of Zillow, has put his Brentwood Park estate on the market for $24 million, according to Redfin. The asking price is $7 million over the “Zestimate,” or Zillow’s appraisal of what the home is worth.

Property records show that Rascoff paid $19.7 million for the property in 2016. The listing states that the 12,700-square-foot home – remodeled by architects Ken Ungar and Steve Giannetti – is located on a half acre in a gated neighborhood. The Zillow Zestimate for the house suggests it’s worth $16.7 million.

Josh and Matt Altman of Douglas Elliman have the listing.

Rascoff purchased the house from investment banker Michael J. Richter, who reportedly paid $9.3 million for the Parkyns Street manse in 2012.

The home has six bedrooms and nine bathrooms, along with a “spectacular” chef’s kitchen, a state-of-the-art theater with stadium seating, a fitness studio and a large master suite with a large balcony. The estate also features a two-bedroom guest wing, a motor court, and a spa, pool and mudroom.

Rascoff is currently launching dot.LA, a news and events company that will cover the tech scene in Los Angeles.

Last year, Rascoff stepped down from Zillow, which has pivoted to an ibuyer model with Rich Barton at the helm.