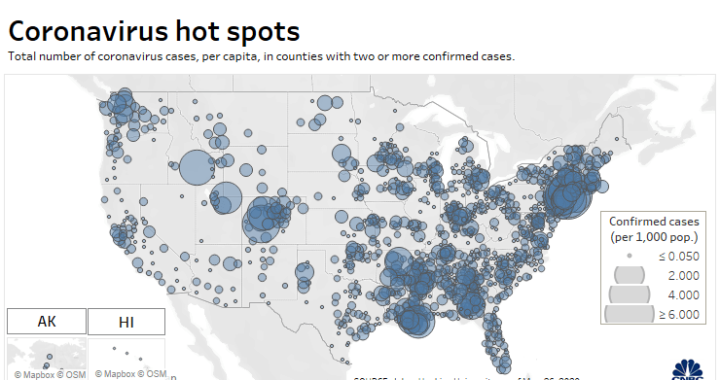 Confirmed COVID-19 cases in the U.S. surpassed 100,000 Friday, doubling in just three days as the pandemic accelerates and the U.S. rolls out broader testing measures.

The virus emerged in Wuhan, China, in December. It has since spread to more than half a million people in almost every country around the world and continues to pick up speed, the World Health Organization warned earlier this week.

“The pandemic is accelerating,” WHO Director-General Tedros Adhanom Ghebreyesus said Monday at a press briefing from the organization’s Geneva headquarters. “It took 67 days from the first reported case to reach 100,000 cases, 11 days for second 100,000 cases, and just four days for the third 100,000 cases.”

The number of confirmed cases likely underestimates the true number of infections across the country, officials have acknowledged. Testing in the U.S. has been hampered by delays and a restrictive diagnostic criteria that limits who can get tested.

With 44,635 confirmed cases as of Friday morning, New York state accounts for almost half of all cases in the U.S., according to Gov. Andrew Cuomo. He said Thursday that the rapid growth of confirmed cases is partly due to a “backlog” of infections that had not been confirmed due to lack of testing.

Major outbreaks in hot spots such as New York threaten to overwhelm the local hospital systems, which have a limited number of beds, staff and equipment, particularly ventilators, a potentially life-saving device. Cities and states across the country have rolled out strict measures to curb the spread of the coronavirus.