The United Kingdom has frozen assets belonging to two Russian oligarchs worth up to $10 billion pounds, or $13 billion U.S. dollars. Eugene Tenenbaum and David Davidovich are both close associates of Russian billionaire Roman Abramovich. Thursday’s action represents the largest asset freeze in British history, according to a government spokesperson. The freeze on Tenenbaum and Davidovich was coordinated with a freeze by authorities on the offshore tax haven of Jersey froze assets valued at more than $7 billion that are suspected of being connected to Abramovich.

The United Kingdom on Thursday announced that it had frozen assets belonging to two Russian oligarchs worth up to $10 billion pounds, or $13 billion U.S. dollars.

The actions against Eugene Tenenbaum and David Davidovich, two close associates of the better known Russian billionaire Roman Abramovich, represent the largest asset freeze action in British history, according to a government spokesperson.

Thursday’s asset freeze came one day after authorities on the offshore tax haven of Jersey froze assets valued at more than $7 billion that are suspected of being connected to Abramovich.

This brings the combined value of the assets frozen to as much as $20 billion. In addition to the freeze, Davidovich was banned from traveling to Britain. Tenenbaum, however, was not.

Jersey is a self-governing Channel Island whose head of state is Britain’s Queen Elizabeth II.

But British officials said the Jersey judgement against Abramovich and the UK actions against Tanenbaum and Davidovich were coordinated.

They were aimed at cutting off potential sources of cash that Russian President Vladimir Putin could call upon to bankroll his botched invasion of Ukraine.

“We are tightening the ratchet on Putin’s war machine and targeting the circle of people closest to the Kremlin,” British Foreign Secretary Liz Truss (below) said in a statement announcing Thursday’s asset freeze. “We will keep going with sanctions until Putin fails in Ukraine. Nothing and no one is off the table.” 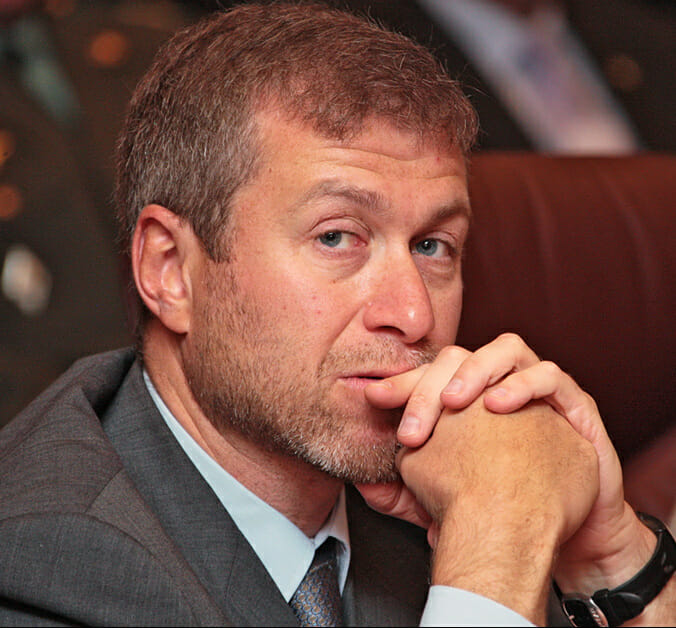 England, and in particular London, has long served as a hub for Russia’s post-Soviet billionaire class, and several landmark properties in the city’s most fashionable areas serve as second homes to Russian oligarchs.

But Russia’s brutal war in Ukraine and the international response to it is threatening the financial security that British pounds and British property once represented to Russia’s richest and most connected oligarchs.

British sanctions imposed on Abramovich in March are already forcing him to sell the renowned London soccer club Chelsea.

A multi-billion dollar deal to sell Chelsea is reportedly nearing completion, with four bidders still in the running to own one of Europe’s most successful soccer teams.

Unlike a high-profile asset like Chelsea, the holding companies now controlled by Davidovich and Tenenbaum (below, left) represent the other side of Abramovich’s empire, one that largely remains hidden.

The international sanctions imposed in response to Russia’s war on Ukraine have shed new light on the worldwide labyrinth of shell companies that Russian oligarchs use to disguise the sources and destinations of their wealth.

In the past week, relatively tiny tax haven countries like Jersey and the Cayman Islands have announced the freezing of tens of billions of dollars in assets held in their banks by Russian oligarchs who have come under sanction.

Jersey has long served as a secretive offshore corporate tax haven. Some of the world’s wealthiest people hide their assets in Jersey using byzantine mazes of shell companies.

Tenenbaum and Davidovich are both involved with one company registered in Jersey called Evrington Investments Limited that is linked to Abramovich, according to British authorities.

Less than a month later, Tenenbaum transferred control of the company to Davidovich.

But it wasn’t just Tenenbaum who took over Abramovich assets on precisely the day of the invasion.

And it wasn’t just companies.

One of Abramovich’s biggest yachts, the Aquamarine, was also transferred to Davidovich on Feb. 24, according to an investigation by The Guardian. Technically, the 150-foot super yacht is owned by a company called MHC Jersey Ltd, which is registered on Jersey.

Davidovich confirmed to the Guardian that he was the owner of both MHC and of the yacht itself.