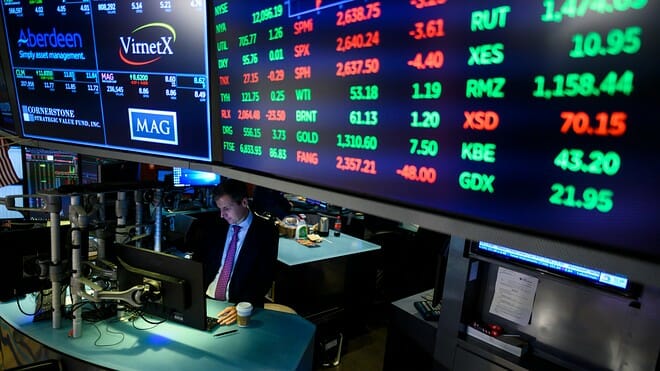 Few traders have had careers as long and stellar as Stanley Druckenmiller and Paul Tudor Jones.

Rarer still, however, is for both of those investors in the same week to describe themselves as “humbled” by what they’re seeing in the stock market.

But both Druckenmiller and Jones said the S&P 500′s robust rally since March left them perplexed and wondering how, amid a global pandemic and civil unrest, the index could have rebounded with such strength.

After all, even with Thursday’s steep losses, the index is up 37% since its March low.

They and others now say that a combination of unprecedented monetary and fiscal stimulus appears to have pacified the market in a way they’ve never seen before.

“Let me tell you, if there was a franchise for humble pie, oh my lord there’d be a mile long to own that because we’ve all had huge gulps of it — me included,” Jones told the New York Economic Club on Wednesday. “You just had unprecedented times in every way, shape or form.”

“I’ve been humbled many times in my career, and I’m sure I’ll be many times in the future. And the last three weeks certainly fits that category,” he said.

For those unfamiliar with the two investors, Druckenmiller — who said as recently as mid-May that he thought the market was overvalued — and Jones aren’t the type to change their minds on a whim.

Jones, whose Wall Street fame can be tied back to his brazen and accurate prediction of the October 1987 crash known as “Black Monday,” has made much of his fortune by standing by his convictions.

Bets designed to pay off in times of market duress like Black Monday, when the stock market fell 22% in one day, or ahead of the Great Recession have solidified Jones’ prowess.

Fellow billionaire investor Druckenmiller also isn’t one afraid of taking a contrarian bet if he’s convinced of a good trade. His famous short bet against the British pound in 1992 netted George Soros’ Quantum Fund some $1 billion in profits.

So when Druckenmiller said Monday that he’s been humbled by the market’s rebound and has only returned 3% since the March bottom, others tend to pay attention.

Explaining the S&P 500′s climb since March is a tricky business with many possible answers, but Jones and Druckenmiller say the gains almost certainly have something to do with Washington.

Congress passed in March the $2.2 trillion CARES Act, a mammoth piece of emergency legislation that sought to inject the U.S. economy with a much-needed cash infusion. The law, unrivaled in American history for its scope and size, came as businesses closed and people sheltered at home to slow the spread of Covid-19.

It provided funding for hospitals and research labs, direct payments of $1,200 to individuals earning up to $75,000 and dramatically expanded jobless benefits for those the millions of Americans who’d find themselves without work in the weeks to come. It also established the Paycheck Protection Program (PPP) and sought to provide support to many of the smallest businesses in the U.S.

An additional piece of stimulus legislation, the $3.5 trillion HEROES Act passed by House Democrats last month, is stalled in the Senate, where Republicans thus far favor a wait-and-see approach to further fiscal stimulus.

But as helpful as the CARES Act was for individuals and commerce, investors have applauded perhaps even louder for the Federal Reserve. The Fed, led by Chairman Jerome Powell, announced throughout March and April a torrent of new lending powers designed to provide as much liquidity to the credit markets as possible.

This unparalleled response from the Fed has in effect drowned the market in cash and provided business owners with one of the most powerful safety nets in U.S. history, said Prudential Financial market strategist Quincy Krosby.

“Let me put it this way: The Fed’s balance sheet in December 2008 was approximately $880 billion. And then when they finished [with Great Recession stimulus] it was about $4.5 trillion,” she said in a phone interview on Tuesday. “Now this time around, in very, very short order, they’re above $7 trillion.”

But in addition to expanding its balance sheet and asset purchases, the central bank announced its own $2.3 trillion lending program that will extend credit to banks that issue PPP loans and purchase up to $600 billion in loans issued via the Main Street program to mid-sized businesses.

watch now
VIDEO03:16
Possible we need to do more, Congress needs to do more: Fed’s Powell. It also said it would expand plans to backstop lending to some of the country’s largest companies by supporting riskier bonds issued by firms that have lost their investment-grade status.

“Think about how fast they moved. And how quickly they moved into every nook and cranny in the market to stabilize financial conditions,” Krosby said of the central bank. “They’re everywhere, they’re everywhere. And they have made it clear they’re not going to stop.”

Not out of the woods yet?

But Krosby noted that while markets have been buoyant about the Fed’s monetary “bazooka,” recent economic data is beginning to show signs of improvement. She highlighted strength in the housing market — and specifically mortgage applications for home purchases — as evidence Americans are feeling at least somewhat optimistic about their year ahead.

Applications for mortgages for the week ended June 6 were up 13% from a year ago despite higher interest rates, the Mortgage Bankers Association said Wednesday. Last week’s far-better-than-expected May jobs report also lifted equities and the economic outlook for 2020.

But while a downtick in double-digit unemployment may have surprised investors to the upside, economists and politicians alike caution that coronavirus-related turbulence isn’t likely to go away so soon.

U.S. Senator Bob Menendez said that while he’s glad to see any signs of improvement in the labor market, more needs to be done to ensure those successes aren’t lost in the months ahead.

“I’m always happy when we get a good jobs report … but I think it’s way too early to claim victory” the New Jersey Democrat said when reached via phone on Wednesday.

“I understand why people feel different than the last time,” Menendez said. “In 2009, the stimulus bill was less than $1 trillion. That’s a third of the size of what we’ve pumped into the economy since March.”

But, the senator argued, even more federal support is needed to help states like New Jersey that have borne an outsized proportion of U.S. Covid-19 cases and had to implement strict business closures to help slow its spread.

Menendez on May 18 introduced a piece of bipartisan legislation known as the SMART Act that would appropriate $500 billion to state and local governments based on infection rates and tax revenue losses.

“I have enough data to know that there are things that are coming at us that we need to resolve,” he said. “I would hope that there’s a sense of urgency of now. July’s going to be pivotal as to whether or not these things happen.”