Plans to double the amount of green space in Swansea over the next decade could help the city adjust to climate change, according to the council and Natural Resources Wales (NRW).

The aim is to help with issues such as flooding, while boosting wildlife and residents’ wellbeing.

It comes amid calls to develop a series of “urban national parks” across Wales.

Town and city councils have been invited to an environmental conference to learn more about the idea.

At the event in Cardiff they will hear from those behind London’s efforts to become the world’s first National Park City.

The idea is that local communities, businesses and public bodies work together to join up existing areas of greenery so wildlife can move through them, as well as creating more.

It is a different approach to the traditional national parks in rural beauty spots, which have an authority to oversee their work and can influence planning decisions. 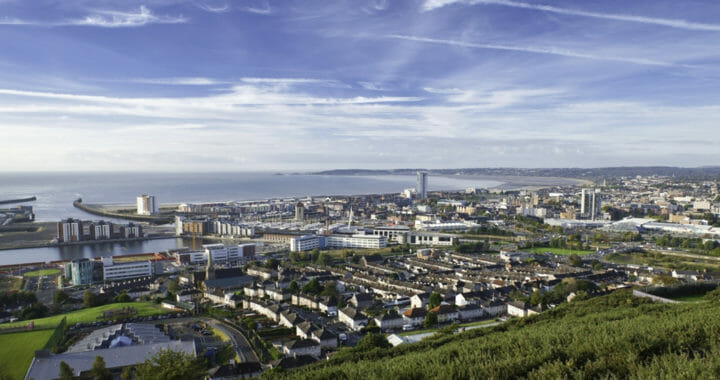 David Clubb, of environmental partnership Afallen, which has organised the conference, said there had been a lot of interest.

“I’d like to see each of the towns and cities in attendance go back and work with other organisations on developing their own ideas for how their own national park would work,” he said.

“This is not a one size fits all approach… We need to work with local people who understand their area like no-one else does, to create all of these wonderful ecological hotspots across Wales.”

Swansea council, working with NRW, is preparing to publish its strategy for more “green infrastructure”, following months of public consultation.

Robert Francis-Davies, Swansea council’s cabinet member for investment, regeneration and tourism, said: “[It will use] a combination of street-level features like street trees and rain gardens as well as vegetation on buildings, including green roofs and green walls.”

Fran Rolfe, sustainable places officer at NRW, said it was an “important opportunity to regenerate this city for wildlife and wellbeing”.

“We did a huge amount of community engagement to really make sure we knew what they wanted to see. [It shows] the market and developers that people actually want this stuff.”

She will work with local businesses and community groups to help guide their efforts – which could include vertical wall gardens, urban allotments and more trees.

Already two major housing associations have pledged to take part, with Coastal Group planning a green roof on their office block in the city centre.

Gareth Davies, executive director of growth and new business, said it was looking at replacing the artificial grass on its terrace with plants, vegetable plots and bee hives.

“When the government announces a climate emergency we have to take that seriously – we have to move forward with some proper action and this is part of that.”

Claire Tristham, director of development at Pobl, the largest provider of affordable homes in Wales, said it would also be providing more greenery in its developments.

“I think in the past we would have thought we were doing really well if we had some trees, but now it’s about understanding which species we’re planting and what effect that will have on biodiversity, while also providing areas that can hold water or offer space for children to play.”