Brazil’s census counts Black communities that were started by slaves for the first time.

An activist who lives in a “quilombo” community says that taking part in the census is a way to “resist and change” as the community deals with environmental and other problems.

For the first time in the 132-year history of the Brazilian census, there is a question about how many people live in “quilombo” communities, which were started by escaped slaves.

On Ilha de Mare, an island with several quilombos near Salvador, Brazil, this chance to be counted is one step toward a political change that local organisers have been working for a long time.

“Taking part in the census is a way for us to resist and bring about change,” says Marizelha Carlos Lopes, a local activist and fisherwoman who is 52 years old and lives on an island where 93% of the people are Black. “One of our goals is to avoid being made invisible on purpose.”

Her friend Eliete Paraguassu, who is 42 years old, is opening up another front as part of the plan. She is the first woman from the island to run for a seat in the Bahia state legislature. She is one of a record number of Black candidates running for state and federal offices in Brazil’s elections in October.

Brazil’s updated census and the growing number of Black candidates are part of a slow reckoning with its long history of slavery, which ended in 1888, making it the last country in the world to do so.

Quilombos were made over hundreds of years by slaves who escaped forced labour and moved to remote forests, mountain ranges, or islands like Ilha de Mare to live on their own.

Residents of Quilombo now hope that a proper count of their population and more elected voices will lead to better social services and rights for people and places that have been left off official maps for a long time.

Nearly 6,000 quilombo territories have been found by the national quilombo association, CONAQ. Antonio Joao Mendes, the head of CONAQ, said that the government’s recognition of the communities picked up speed under former President Luiz Inacio Lula da Silva twenty years ago, when the communities got more formal land rights and support for cultural programmes.

Mendes said that Lula’s run for president this year is a stark contrast to the current president, Jair Bolsonaro, who has gotten rid of many of these programmes and slowed down the recognition of more quilombos.

In 2017, Bolsonaro was fined 50,000 reais ($10,000) for insulting people who lived in quilombos by saying that they “don’t do anything” and “aren’t even good for procreating.” Because he was a member of Congress at the time, the case was thrown out.

Residents of the quilombos on Ilha de Mare have been able to get by for generations thanks to the hard work of artisanal fishermen and fishwomen.

Marizelha’s 26-year-old nephew, gets up at 3 a.m. to fish in the clear waters around his hometown of Bananeiras. He is proud to have a tattoo on his left arm of his grandfather casting a net to remember this family tradition. 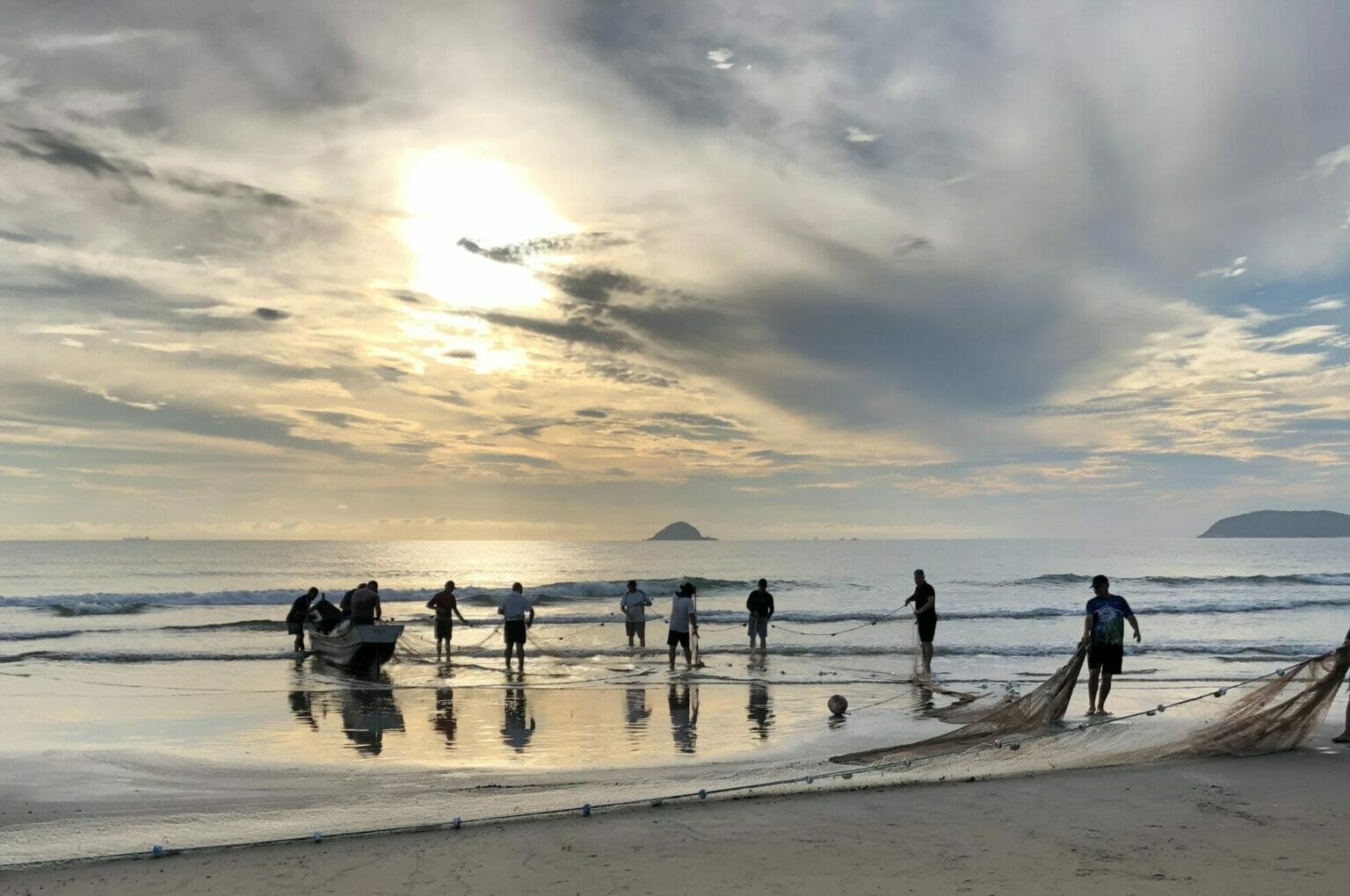 Pollution in a city puts people’s jobs at risk.

Since there are no bridges to the mainland, which is about a kilometre away, people on the car-free Ilha de Mare get around the same way their ancestors did: on foot, by horseback, or in small boats. Uine Lopes says it feels like a peaceful island away from the noise and violence of the big city.

In the afternoon, the women get together to scrape the meat off the crabs and clams they caught that day, while others weave traditional straw baskets. Evenings are a popular time for neighbours to meet at the beach for dance or gymnastics classes.

But the fishing communities say that their way of life is threatened by pollution from a nearby petrochemical port across the bay, where a boat carrying propane gas exploded in 2013.

An industry group that was in charge of cleaning up the spill said it was keeping an eye on the bay to protect the nearby communities, but Marizelha Lopes remembers that contamination caused them to lose a whole season of fishing and tourism.

“There are still no specific studies or government policies that will guarantee our safety,” her nephew said. “We have no escape route.”

When asked for comments, the port authority didn’t say anything.

Eliete Paraguassu, who collects shellfish like Marizelha, is going into politics because she is tired of not being able to solve what she calls “environmental racism” against her island community.

She went to nearby cities before the Oct. 2 election to get people to vote for her for the state legislature. She had stickers that said “My vote will be antiracist” and “Justice for Marielle.”

This is a reference to Marielle Franco, a Black Rio de Janeiro city councilwoman who fought for racial justice and was shot and killed in 2018 in what some people have called a political killing.

Black women like Paraguassu have been inspired by her life and work. In 2018, just under a quarter of the 513 people elected to the lower house of Congress were Black, but only 12 of them were women.

In contrast, 50.7% of Brazilians in the 2010 census said they were “negro,” or Black, which is a term used by the government statistics agency to describe people of two different races.

Uine Lopes spends some time fishing on Ilha de Mare and some time at university studying rural education. He is part of a small group of students who want to return to the island with the findings of their research.

“We need to be aware and vote for as many Black people as possible who are committed to the fight and have specific plans for Indigenous communities, quilombolas, fishermen, riverside residents, and so many other groups that don’t get enough help from the government,” he says.

Marizelha didn’t go to school any further than the fifth grade. But seeing how her nephew balances school and community service has given her ideas.

She said, “I’m becoming more and more certain that universities are important.” “But our fight and resistance are what get us ready for the confrontation.”